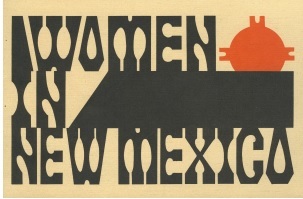 On these pages, we explore the lives of some of the women who shaped New Mexico in large and small ways.  We've included some female "firsts", some notable women who used their educations to contribute to life in New Mexico; we also use library collections, Census data, UNM publications, and New Mexico newspapers to introduce New Mexican women who earned degrees or taught at the University of New Mexico.

Other notable New Mexico women we'd love to include more about: 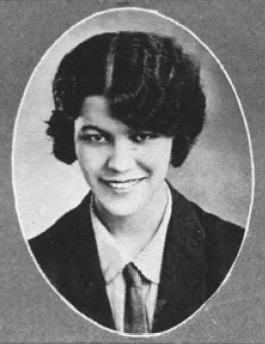 Mela Sedillo:  According to the New Mexico Archives Online,

Mela Sedillo Brewster Koeber was a teacher in the University of New Mexico Art Department from 1932 to 1951. She taught design, Spanish and Mexican folk arts and dance, Spanish language classes and worked with theater groups. She was the first dance teacher at the college. She was born in 1903 and received her BA in 1926 from UNM, continuing her studies in the 1930s. She received her Masters from Columbia University, having been granted a Rockefeller Fellowship to study there in 1935-1936.

Sedillo came from an established colonial Hispanic family that was involved in politics and local affairs. She was active in the revival of Hispanic arts and crafts and defense of Hispanic rights during the 1930s-1940s. 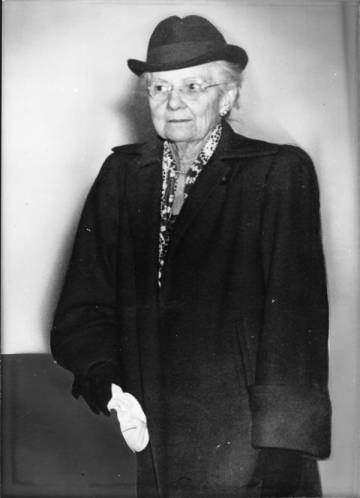 Harriet B. Sammons:  The first woman bank president in New Mexico, president of the First National Bank in Farmington.

Photo from The Farmington Museum via New Mexico Digital Collections 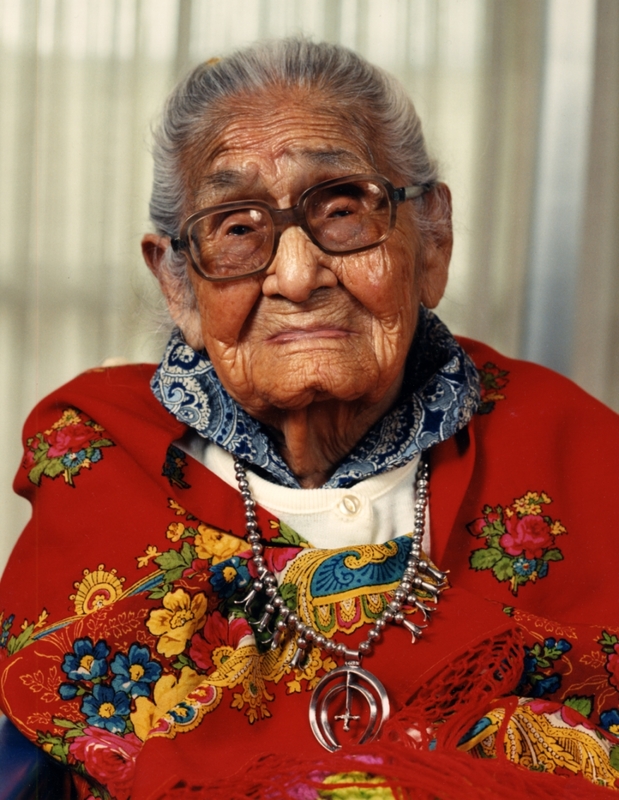 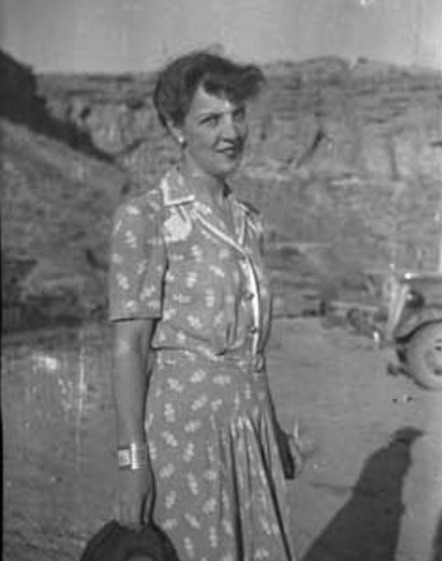 Florence Hawley Ellis:  According to the New Mexico Archives Online,

Born in Sonora, Mexico, Florence Hawley Ellis (1906 – 1991) earned her Ph.D. from the University of Chicago in 1934. Her dissertation focused on tree ring dating (dendrochronology) at the site of Chetro Ketl in Chaco Canyon, New Mexico. She was one of the first researchers to focus on tree ring dating, doing early research in eastern North America (Norris Basin) in the 1930s. Ellis began teaching archaeology and cultural anthropology at the University of New Mexico in 1934; she also founded archaeological field schools including Sapawe (1950s-1960s), Tsama (1971) Yunque/Yungue (1950s). As a woman, she received less money teaching classes normally taught by men. Ellis also served as a consultant in numerous lawsuits involving Native American land and water claims. Breaking barriers in her own research and scholarship, she also helped pave the way for the acknowledgement and acceptance of women in academia. 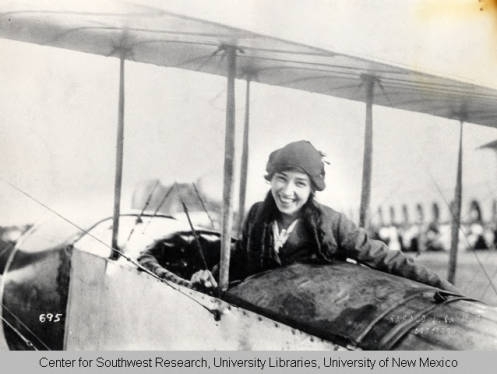 Katherine Stinson Otero: According to the New Mexico Archives Online,

Katherine Stinson was born in 1891 in Fort Payne, Alabama. She was introduced to aviation in 1911, when she participated in a balloon ascension. This started her life-long interest in aviation and made Katherine Stinson one of the first female pilots in the United States and the world. Her career covered many "firsts" (in aviation as well as for women) such as first night flight, long-distance records, air-mail services, and skywriting. In 1915 the Stinson family opened a flight school and Katherine attended aviation exhibition shows, in which she reportedly got paid up to $2000 per flight. A major event in Kathrine Stinson's aviation career was an exhibition tour to the Orient.

Photo from the Katherine Stinson Pictorial Collection at the Center for Southwest Research, University of New Mexico. 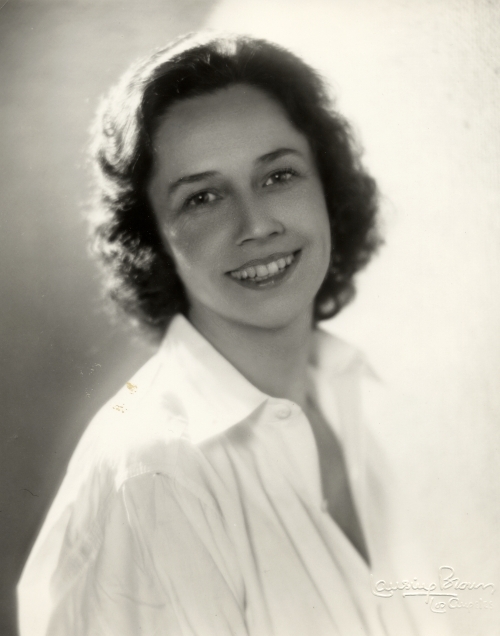 Grace Thompson Edmister was probably the first woman in the nation to direct a city orchestra. She organized the music department at the University of New Mexico and taught there from 1923 to 1942. She also founded the Albuquerque Symphony Orchestra in 1932 and gave many years of service to New Mexico's cultural life.

A longer biography is part of the 1976 Women in New Mexico exhibit by the American Association of University Women. 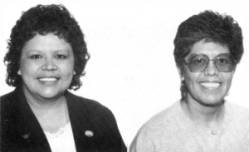 Patsy and Nadine Cordova: From the New Mexico Archives Online,

Nadine and Patsy Córdova, sisters, were born in Vaughn, New Mexico, a small town 100 miles east of Albuquerque. Long-time educators, they received a "Notice of Intent to Discharge" from Vaughn Municipal Schools' Superintendent C. Arthur Martinez on February 28, 1997. Martinez claimed that they insubordinately refused to teach the prescribed curriculum and instead replaced it with a racist, inappropriate, and disruptive curriculum, which caused ethnic friction in the community. A hearing before the school board in July of 1997 resulted in a 5-3 vote to fire Nadine and Patsy Córdova.

The Córdova sisters responded with an American Civil Liberties Union sponsored lawsuit against the Vaughn Municipal School District for violating their first amendment rights. The case was settled out of court in November 1998 for $520,000. The settlement stipulated that their personnel files would be purged of negative references to the case, and that Nadine and Patsy would be free to talk about the case. They have spoken extensively on first amendment rights, especially as it relates to teachers in a public school setting. Patsy retired from teaching in 1999 and Nadine became administrative assistant for the Chicano Studies Program at the University of New Mexico.

Shirley Hill Witt earned a PhD in Biological Anthropology from UNM in 1969. She was one of the first Native American women to earn a PhD. Born in 1934, a member of the Akwesasne Mohawk Nation, Dr. Witt had a long distinguished career as an educator and advocate for Native and women's rights.

Photo from the Shirley Hill Witt Papers 1610-1991 at the Center for Southwest Research, University of New Mexico, via New Mexico Digital Collections. 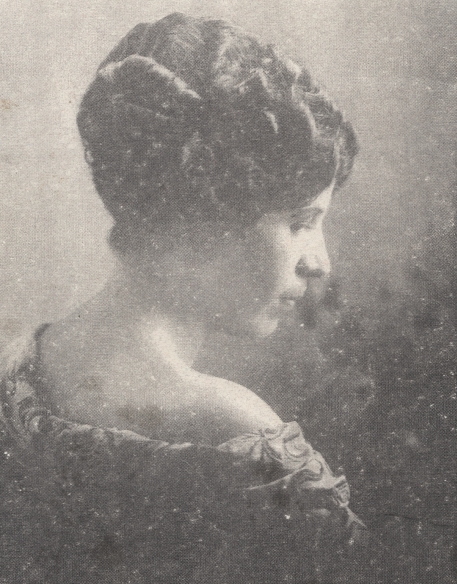 Soledad Chávez Chacón, the first Hispana to be elected to a state office, namely, the office of secretary of state; the first woman to preside as NM governor (as acting governor); and the first Hispana NM state legislator from Bernalillo County.

And yet more notable NM women: