In UNM's Digital Repository are the transcripts and video interviews with Brown Simmons herself, the first Black woman to graduate from the UNM School of Law (in 1974), the first Black woman admitted to the State Bar of New Mexico, and a former criminal defense attorney; Angela J. Jewell, retired district court judge; and Rita Ann Turfley Powdrell, Albuquerque businesswoman and Director of the Board of the African-American Museum & Cultural Center.

In 1976 the Albuquerque chapter of the American Association of University Women (AAUW) held an exhibit at The Albuquerque Museum to honor the contributions of women to the history, culture and politics of New Mexico. All of the women were 19th and 20th century women who were not all New Mexico natives, but who lived here and contributed to the artistic, political, and educational life of the state.

The exhibit catalog has been digitized and is available in UNM's Digital Repository.

An ongoing statewide coalition project to recognize the contributions of women to New Mexico with highway markers.  View the complete list of markers.

This beautiful set of 12 full-color posters highlights the remarkable achievements of 12 Latina women, their courage, compassion and contributions in helping shape American life. The posters are inspiration tools for schools and colleges, community groups, organizations and homes.  Each poster consists of a photographic image (photographs by Idaljiza Liz-Lepiorz) and a quotation by one of the women. The subjects include: Julia Alvarez, Sandra Cisneros, Miriam Colón, Antonia Hernández, Dolores Huerta, Tania León, Amalia Mesa-Bains, Adriana Ocampo, Antonia Pantoja, Helen Rodríguez-Trias, Ana Sol Gutiérrez, and Nydia Velázquez. The posters were produced by the Bread and Roses Cultural Project, to accompany the videorecording "Women of Hope: Latinas abriendo camino: 12 ground-breaking Latina women." 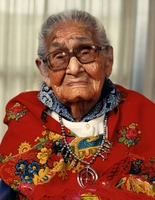 The Indian Pueblo Cultural Center dedicated each day in March 2018 to strong Native women!  Click the links below to view their individual posts.

Lucy M. Lewis, Acoma Pueblo, one of the most famous Pueblo potters of the 20th century

Maria Martinez, San Ildefonso Pueblo, one of the most influential Native Americans of the 20th century

St. Kateri Tekakwitha, Mohawk and Algonquin, the first North American Indian canonized as a saint in the Roman Catholic Church

Thank you to Vina Begay, Archivist and Librarian, Indian Pueblo Cultural Center, for letting us know about these materials.