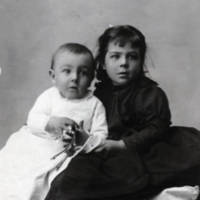 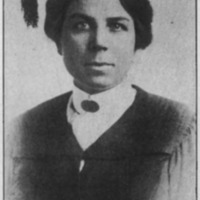 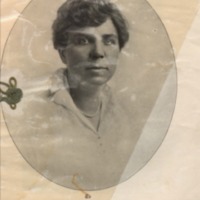 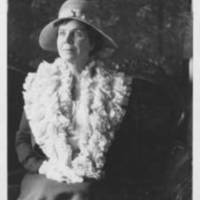 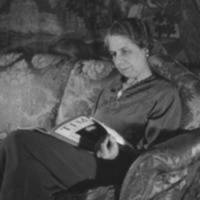 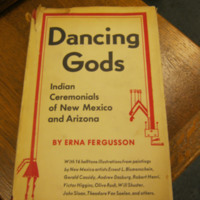 Erna Fergusson was granted an Honorary Doctorate of Letters by the University of New Mexico in 1943. She was the first woman to receive this honor.

Fergusson was born on January 10, 1888 to Clara Mary Huning and Harvey Fergusson, part of a prominent family in Albuquerque. She lived in the La Glorieta historic hacienda in Albuquerque (now part of the Manzano Day School), but spent time at Castle Huning, her grandfather’s 700-acre grounds near Old Town. In 1897, Fergusson traveled with her father to Washington, D.C., where he served as a United States delegate.

After coming back to Albuquerque in 1899, Fergusson attended Central (Albuquerque) High School, graduating in 1906. While teaching for Albuquerque Public Schools, Fergusson completed a Bachelor’s Degree in Pedagogy at UNM in 1912 at age 24. Fergusson went on to obtain a Master’s Degree in History from Columbia University in 1913. Fergusson taught for a time at Chatham Hall in Virginia and then returned to Albuquerque where she continued to teach.

Life changed for Fergusson at the start of World War I when she began to work as the Home Service Secretary and State Supervisor for New Mexico. Fluent in Spanish, Fergusson traveled all over New Mexico by train, automobile, horseback, and on foot during 1918 and 1919; during this year, she visited remote areas of New Mexico where she assisted the families of soldiers.

At the end of the war, rather than return to teaching, Erna went to work as a reporter for The Albuquerque Herald. While in this position, she partnered in the "dude wrangling business" with Ethel Hickey, a former faculty member at the University of New Mexico. For five years, the women operated "Koshare Tours," guiding visitors to the Pueblos in New Mexico, and to the Navajo and Hopi reservations in New Mexico and Arizona. These experiences influenced Erna to begin a serious study of New Mexico's three cultures--Indian, Spanish, and Anglo--which would later be reflected in her writings.

Her travels and studies developed Erna's opinions on New Mexican culture, which she was not hesitant about expressing in a very straightforward manner. In a letter to Frank Driver Reeve in 1947 opposing racial intolerance at UNM, Erna writes that "sororities and fraternities are little snob factories and do make many lines seem sharper than necessary," while acknowledging that she does "talk wildly among friends."

In another example, a 1948 article in the New Mexico Quarterly discusses a 1947 crisis on the Navajo reservation and the relationship between Navajos and Anglos. She writes, "But the transcendent need -- especially in New Mexico and Arizona -- is for a public opinion, informed, fair-minded, both aware and ashamed that we have allowed this crisis to arise. For we, acting through our government, have denied these people the basic rights of our civilization -- education, health, a chance to make a living, and the vote. And in doing that, we have violated a solemn treaty."

Erna's first book, Dancing Gods, was published in 1931. She went on to write many travel books and several histories, and she was a founding member of the Albuquerque Historical Society, established in 1942.  While in her attitudes and her writing, Erna sometimes unquestioningly accepted the prejudices of her time and upperclass upbringing, David Remley writes of her, "It is to her credit that in this powerful position of influence, she was a responsible student and journalist.  Although in many details her accounts suffer from the evanescence to which all journalism is a victim, her spirit, her sympathy, and her understanding of the psychological and economic problems of minorities facing an overwhelming and alien civilization are relevant today.  In her best books she is a careful craftsman, and throughout her work runs that capacity for enlightened criticism necessary to the journalist who seeks to interpret his own broad cultural backgrounds to a mass audience."