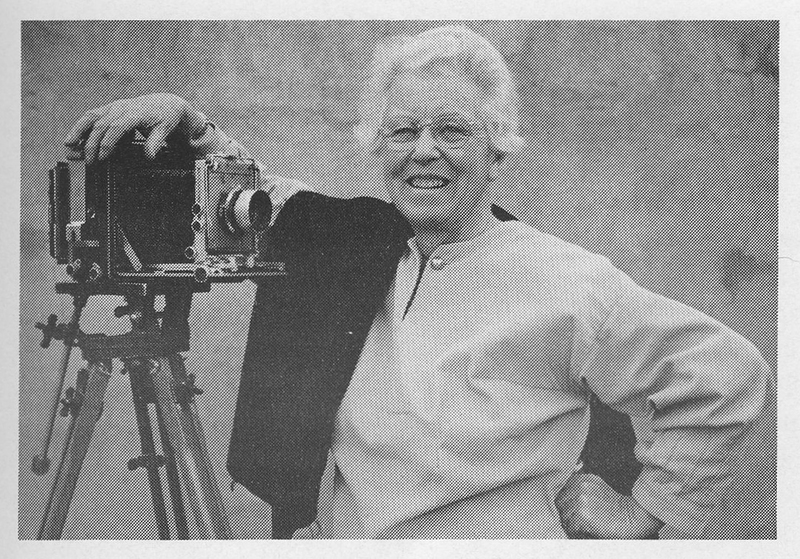 Laura Gilpin has been a professional photographer for almost 60 years. Her work is art. She has done more to record photographically the Southwest and its people than any other living person.

Born in Colorado, she developed an interest in photography as a young girl. She has been called a born observer -- one who is somehow able to see more than others see in a given view. This exceptional power of observation has served her throughout her life in her photography.

Though Laura's visual talents were a gift, her technical skill required refinement. In 1916 she entered the Clarence H. White School of Photography in New York City, where she studied for three years.

After this training, she returned to the Southwest and embarked with a friend on camping trips through the area, particularly Navaho country. These trips led to her understanding and eventual photographic documentation of this land and the Navaho people.

From 1919 to 1941 Laura lived in Colorado, taught photography, and traveled and photographed extensively. She had shows in New York and elsewhere. Her photography ranged from scientific slides to opera productions. She continued to use and teach the platinum-coating process, which gave many of her pictures a richness and warmth unobtainable with silver-coating.

She published books on Mesa Verde and the Pueblo Indians (photos and text). And she continued to travel in the Southwest, studying its people and its heritage.

When the war ended, she returned to the Southwest, this time settling in Santa Fe. She published two more books before 1950, Temples in Yucatan and The Rio Grande: River of Destiny. Struck by changes which had taken place since her previous forays, she decided to document pictorially the traditional Navaho before his old ways were gradually lost to more "modern" lifestyles. It was during this period that she photographed the rock painting of their Changing Woman, now forever lost under the waters of Navaho Lake.

This interest culminated in the publication of The Enduring Navaho in 1968. Presenting a new view of the people, this work demonstrates their unique and enduring lifestyle in harmony with the environment of the Southwest.

Over the years, Laura's photographs have developed a clarity and directness which attracts the viewer to each photo and to the artist herself. Her style reflects the kind of person she is -- open, direct, confident, yet sensitive and unassuming. Striking is the broadness of scope and variety in her work. At the same time, it presents an impressive consistency of quality and vision.

At age 85, she continues to work, photographing Canyon de Chelly in northeast Arizona for another book which she will soon have published.

Laura Gilpin received an honorary doctorate from the University of New Mexico in 1970.

Laura Gilpin Retrospective, catalog of exhibition of Gilpin photographs from 1910 to 1974, at the Museum of Fine Arts, Museum of New Mexico, Santa Fe. (University of New Mexico Press, 1974). 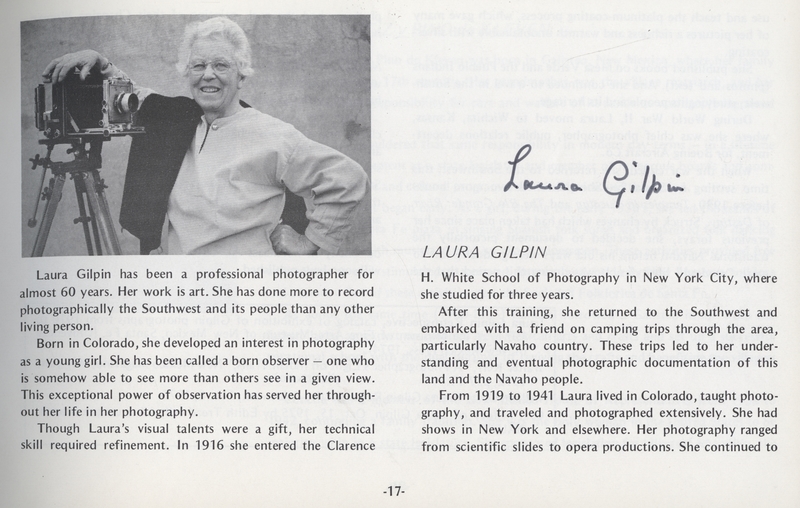