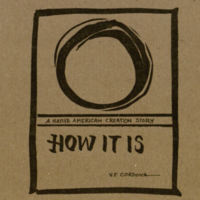 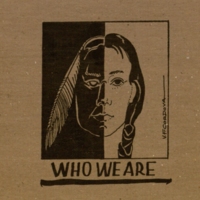 How It Is:  The Native American Philosophy of V.F. Cordova, edited by Kathleen Dean Moore, Kurt Peters, Ted Jojola, and Amber Lacy, The University of Arizona Press, 2007, p.42

"As I was growing up, I confronted the fact that there were different expectations or actions concerning many issues.  My relatives described such contrary expectations by explaining that "they," meaning the "white man," "had a different idea about that..."  The "ideas" involved definitions, descriptions, and even attitudes about human beings and the world.  My question became, "Where do those ideas come from?"  The view that ideas had origins led me to philosophy.  Philosophy, I thought, was uniquely prepared to deal with questions about origins of ideas and concepts..."

"I am not an adherent of the school that demands that works of "dead white males" be overthrown.  We live in a nation grounded upon Western notions--not slavishly so, or we would not have seen the changes that have occurred over the generations.  Most of Western tradition--political, economic, and social--that we experience today is hard fought against the original Church notions.  Western society has changed and does change.  But in order to understand current trends it is important to know what has been..."

"The minority student has not only the "right" to engage in philosophical discourse, but the duty to do so.  All of the rights that are claimed are valid only on the basis of rights defined within a specific cultural frame.  Ignorance of that frame is no advantage.  Philosophy Departments must open their doors to the new questions posed by persons formerly absent from their ranks.  Not to do so makes all of their arguments about the dignity and worth of humans and their society mere intellectual exercise."

"The Western concept of the world and of time makes it difficult to examine the culture of the "other."  Western man writes "the history of the world" as a means of illustrating his own defined "climb" out of the depths of a lower order of things into his present achievement of "higher" status.  Any child's history book portrays this climb:  First, we begin with the cavemen and proceed through the Sumerians, the Babylonians, the Egyptians, the Greeks and the Romans.  The last chapters of this history culminate in the culture of Western Man.  Embedded in the present genetic material of the contemporary child are the experiences of all men, all cultures.  There is nothing new in the world that "modern" man has not already gone through.  In this sense, a look to others is a look to the past.  It is regression.  There is, in this perspective, no truly "other."

"But what if this account of history is wrong?  What if the lifestyle of a nomad on a high mountain plain is truly "alien"?  Or that of the desert dweller?  What if they are unique adaptations to specific environments and not merely "remnants" of an archaic lifestyle?  Could we then admit that we might possibly expand our knowledge of the capacities of the life form we call "human"?  Could we examine the other as something truly different rather than examining them for mythical clues to our own imagined past?"

From A Sense of Place:  The Philosophical Roots of Ecological Crisis, colloquium sponsored by the Philosophy Department at Colorado State University, Fall 1994

"The Native American waits to see what the new compilation of the group's genetic material has produced.  Many Native American groups do not consider children under the age of five as "real" persons.  The newborn is merely humanoid and must be introduced to the mores of the group under the dictum that "he has never been here before."  There is no attempt to "mold" or "train" the individual into what the group wants.  The individual is seen as having brought particular gifts into the group.  The group need only offer opportunities for the child to exhibit his talents.  The introduction into the group consists in the development of the child's awareness of the consequences of his actions on others.  It is when the child exhibits such awareness (around the ages of 5 to 8) that he is counted as a "real" person."

From Ethics:  From an Artist's Point of View, a talk with the Society of Visual Artists, the Art Students Association of the Department of Art, Colorado State University, Fall 1994.

Throughout her educational and professional career, Viola Cordova published many of her writings. Among them were, How It Is: A Native American Creation Story and Who We Are, a book about Native American identity. In 1995, a series of her lectures was published under the title, Ways of Seeing. Bringing a new perspective to philosophy, her writings and poetry gave voice to Native American beliefs. Despite her death on November 2, 2002, her work continues to serve as an important influence in Native American philosophy.

"Students gathered around her the way elk come to hay in the winter, half-starved for ideas that can sustain them...We wanted her to stay.  But she never stayed in a university more than three years, Viola told us, because that's when a professor begins to be slowly poisoned by the artificial accolades and driven by the arcane rules of academic life, publishing just to publish, teaching just to teach."

Conceptual frameworks as a source of cultural distinctions

The concept of monism in Navajo thought

How It Is:  The Native American Philosophy of V.F. Cordova, edited by Kathleen Dean Moore, Kurt Peters, Ted Jojola, and Amber Lacy, The University of Arizona Press, 2007

How It Is:  A Native American Creation Story, by V.F. Cordova, Center for Applied Studies of American Ethnicity, Colorado State University, 1994

Who We Are, by V.F. Cordova, Center for Applied Studies of American Ethnicity, Colorado State University, 1994