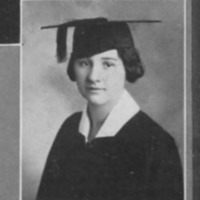 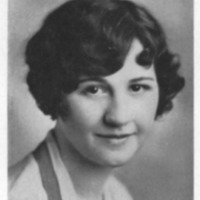 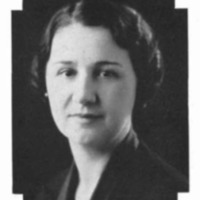 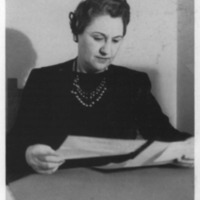 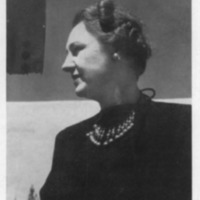 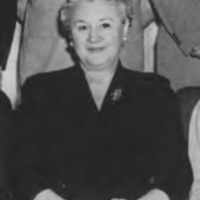 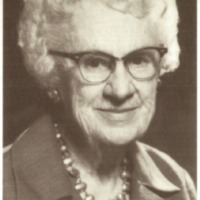 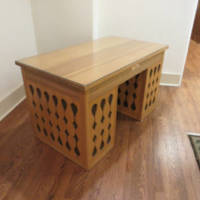 Lena C. Clauve was Dean of Women at the University of New Mexico from 1929 to 1961, a tenure of over 30 years.  During this time, she had a tremendous influence on the student body of UNM.

Lena was born in Wabash, Indiana on August 10, 1895.  She graduated from Wabash High School in 1913, after which she spent time with extended family in Cincinnati and continued her education in several Indiana schools.  However, she returned home several times due to homesickness.  She then taught for several years in Wabash County schools, where she was paid $10 per week.  Early in her career, she reported having difficulty keeping her students on task, and went home crying every day.  Changing roles to traveling music teacher was a better fit for her, and she continued this work until 1923.

Lena's mother and stepfather moved to New Mexico when her mother, Anna, was diagnosed with tuberculosis.  Lena followed to help care for her mother and enrolled at UNM, graduating in 1925 at age 30 with a BA in Music.

During her time as a student at UNM, Lena belonged to numerous student organizations, including acting as the assistant business manager for the yearbook, The Mirage. She also used her musical abilities working as an accompanist for dance classes, the chorus and glee clubs, earning twenty-five cents per hour. She was elected to the Phi Kappa Phi academic honor society in her senior year.

After graduation, Lena pursued employment with Albuquerque Public Schools, where she had been promised a job by John Milne, who was Superintendent at that time. Despite his promise, he refused to hire her because, he said, she was “an immoral woman.” Lena was too humiliated to protest and in the 1920s, there were no protections in place against sexist discrimination in employment. She returned to Indiana to teach for approximately four years.

Several years later, after Lena was hired by UNM, John Milne confessed to her that this insult to her character came from a professor in the music department whose name Lena had given as a reference. This professor had asked Lena for a date on multiple occasions and out of spite at her consistent refusals, he defamed her character to John Milne, who took his word without asking Lena for her side of the story.

In 1929, Lena was hired by President Zimmerman as the first Dean of Women at UNM.  She worked collaboratively with her students to outline the new role, as President Zimmerman's only instructions were "to use her common sense."  Her entry in The Mirage 1930 reads, "The responsibility of this position, that is the most direct means of contact between student body and faculty, is hard to estimate.  Yet Dean Clauve has accomplished successfully this establishing of relations...She, by her initiative and vigor, has done everything in her power to further the interests of her former student body, and because of these efforts, has gained great popularity upon the campus."

Over the years Dean Clauve founded and supported many organizations for women students, as well as supporting women in need both professionally and personally.  On many occasions she assisted struggling students with loans and gifts of money, and even invited a few of them to live in her home.  In The Mirage 1941, the student editors report that "Dean Clauve's cheerful smile reflects her gentle nature.  She has proved herself friend and advisor to all the girls on the campus.  Her kindness and willingness to help have become a byword to those who need friendly, sympathetic understanding."

In 1937 President Zimmerman provided a budget of $500 for new furniture for the dean's office, and Dean Clauve commissioned a desk, a settee and two chairs to be made in Santa Fe.  The desk is currently located in Hodgin Hall at UNM.

Throughout her career and into retirement, Lena Clauve contributed to a multitude of campus and community organizations and took advantage of opportunities to travel around the U.S. and abroad which were not available to many women during that time.

Thank you to Maxine Marks for assistance locating the photographs of Dean Clauve's desk, currently located in Hodgin Hall on UNM's main campus.