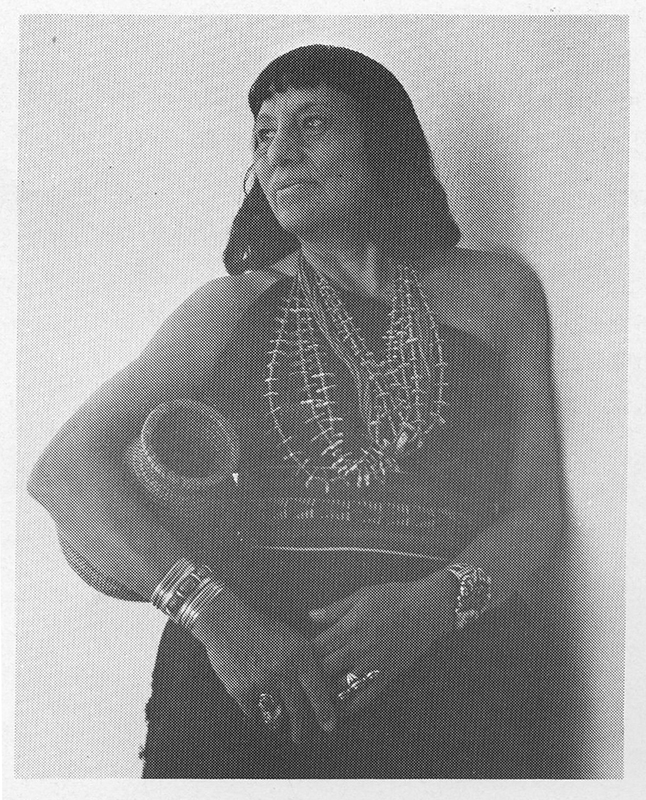 Pablita Velarde has gained worldwide recognition as a Pueblo Indian whose paintings depict the traditions, culture and daily life of her people. These are changing rapidly as the pueblos move forward in time, uncomfortably elbowed by neighboring cultures. Pablita's combination of background, talent and intense commitment to record the old ways net her a unique place in the history of New Mexico.

She wrote and illustrated a book in 1960 called Old Father, the Story Teller. In this, she retells the legends of her pueblo, Santa Clara, as she heard them in her youth from the old men of the village. The title painting, Old Father, portrays the telling of their emergence and migration to the present site.

An extremely productive artist with an intense dedication to work, Pablita records her subject matter, Indian life and traditions, with integrity. Minute details are faithfully executed--jewelry and sashes worn by her figures, decorated pots, woven rugs. Her people are dignified, stylized and display not individual emotions, but the mood of the group and event of which they are a part. They reflect the poise and depth of pueblo life itself.

Though skilled in several media, she is best known for her earth paintings. Stone-ground pigments of sand, earth and clay, mixed with water and glue, are applied in layers to a coated masonite board. This same technique was used by early men to paint on walls of ceremonial kivas.

Pablita spent her childhood playing in the cliff ruins of her ancestors' homes near Santa Clara, feeling their presence and growing within their traditional culture. Leaving the pueblo, she followed an irresistible urge to paint, taking the first art classes offered at the Santa Fe Indian School.

She is mother of a son and a daughter. The daughter, Helen Hardin Craddoc, is also a renowned Indian woman painter, known professionally as Tsa-sah-wee-eh (Little Standing Spruce).

She has lived in Albuquerque since 1947, devoting her life to her work. In a real sense, she is the twentieth century embodiment of the very traditions she portrays; through the integrity of her art, she remains faithful to her own people, while fulfilling herself outside the physical boundaries of their pueblo. 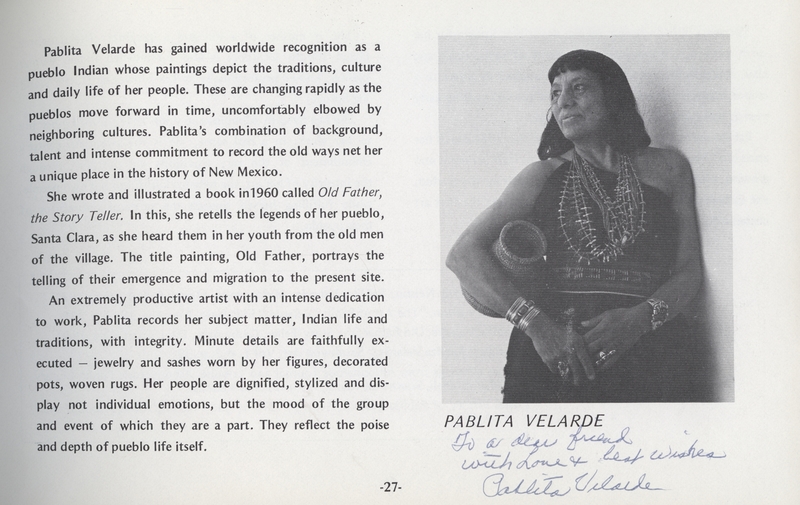