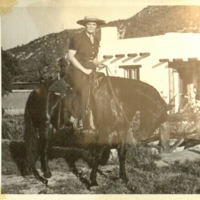 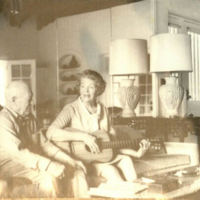 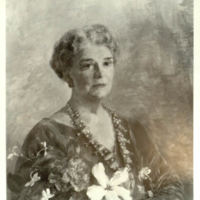 Louise Holland Coe was born in Bartlett, Texas in 1896.  In 1930, she earned a Bachelor of Science degree in Education with a minor in Spanish from the University of New Mexico. She taught school in the Ruidoso Valley from 1916 to 1918, and married rancher Wilbur Coe in 1919. Her interest in education led to the beginning of a public career when she was elected Lincoln County Superintendent of Schools in 1923.  During her tenure there, she consolidated several small schools into one district, an innovation in educational management at the time.

In 1925, only five years after women in the United States had won the right to vote, Louise was the first woman elected to the New Mexico State Senate.  During her four consecutive terms of office, Louise concentrated on programs to improve the public education system. As chairman of the Senate Education Committee for 12 years, she was influential in securing legislation providing free textbooks, larger libraries, higher teacher qualifications and salaries, and designating sales and severance taxes as school revenues.  However, she was aware of navigating the knife edge between speaking up and being perceived -- and treated -- as "unladylike."  In her book The Lady and the Law Books, she writes,

"I made it my business to speak out in the debate on many bills.  Speaking my mind on the Senate floor let the voters know I was concerned enough to get off my chair and offer my thoughts on bills I believed were important to them.

Although I spoke out on the floor in this manner, I was not even remotely what could be called an 'outspoken' senator.  I was, in the lexicon of the day, a 'lady senator,' that is, a lady first and a senator second.  At that time, few women, besides Eleanor Roosevelt, could speak their minds and expect men to listen, and even this great lady was the subject of many ugly jokes and hostile arguments as a result of her efforts." Louise also sponsored legislation attempting to give women the legal right to control their own property. During her last term in the New Mexico State Senate, she served as president pro tem.  While proud and excited to have been recognized by her colleagues for her leadership, Louise, like so many women, struggled to reconcile her professional ambition with her personal relationships.

"At the end of my long and exciting day as President Pro-Tem of the Senate, after the celebratory champagne dinner, the laughter and the dancing with my Santa Fe friends, I returned to my suite at the La Fonda Hotel.  Strange that I had come to think of these rented rooms as home even though I had another home on the far away and lonely Ruidoso River at Coe Ranch with Wilbur.  I took off my dress and lay down across the bed, my fingers running once again over the polished grain of the gavel.  Power.  Excitement.  Recognition.  Praise.  The world of politics.  And then there was the world of home.  Love.  Understanding.  Acceptance.  Comfort.  But I could see no way to reconcile the two; their demands were too opposite.  Embracing either excluded the other and I felt perverse for wanting them both equally."

She left the New Mexico legislature in 1941 to run in the United States congressional race.

After spending twenty-five years working for the people of her state, Louise traveled the world for the next thirty years. She wrote of her varied career and adventures in Lady and the Law Books (1981), and High Roads to Friendships (1984).