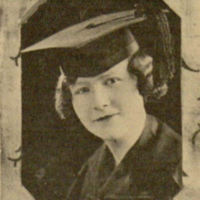 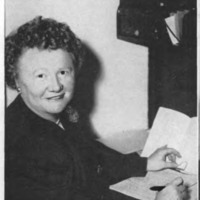 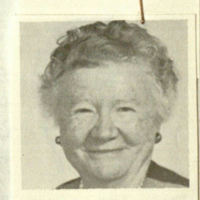 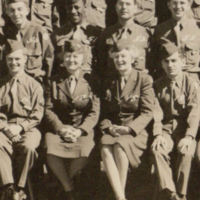 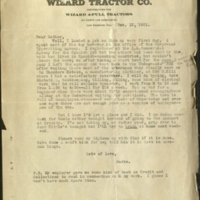 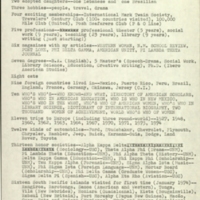 Born in 1901 in Des Moines, Iowa, Marie Pope Wallis had a fascinating life, with experiences and contributions spanning multiple universities, occupations and countries.  Her personal papers suggest a warm, humorous, even whimsical personality, as in, for example, this summary of her life "by the numbers":

A letter to her mother from Los Angeles in December of 1921, when she was 20 years old, details experiences typical of many young women trying to get by on their own away from home, and demonstrates her intelligence, confidence, and good nature:

Well, I landed a job on this my very first day.  I spent most of the day however in the office of the Underwood Typewriting agency.  I registered at the L.A. Commercial Agency for the Spanish job but two others had been sent by then, both had lived in Spanish-speaking countries, but couldn't please the boss; so after taking a short test for the company I left the agency and went back to the Underwood.  And after waiting there most of the afternoon they finally sent me to Theodore Kotzin, a manufacturing clothier, at 236 S. Hill where I had a satisfactory interview.  I will do typing, take dictation, bookkeeping, billing, filing, some kind of clerical work that he will explain tomorrow.  I work from 8 to 12 and from 1:30 to 4:30--all for $16 a week.  Not so bad for a beginner when there were about fifty experienced stenographers all day at the Underwood waiting for positions.  The town is full of unemployed stenos--I saw a host of them today and everyone says there are not enough jobs or a surplus of employees--one of the two.

But I knew I'd get a place and I did.  I am doing some work for Uncle Arthur tonight instead of going to the concert at Trinity.  I'm not taking my, or rather your, grip over to Aunt Kittie's tonight but I'll try to bring it home next weekend.

Please send my diploma up with Glad if it is done.  Give Gene a swift kick for me; tell him it is love in caveman lingo.

P.S. My employer gave me some kind of book on Credit and Collections to read in connection with my work.  I guess I won't have much spare time."

In 1925, Wallis graduated with a Bachelor of Arts from the University of California at Los Angeles, and on June 7, 1947, she became the first woman to earn a doctorate degree at UNM. Her dissertation was titled “Modern Women Poets of Brazil.”  She went on to teach courses as an Assistant Professor of Spanish and Portuguese at UNM, as well as at Albuquerque Public Schools and the Laguna Indian School.

During World War I, Wallis joined the Women’s Army Corps and later became an officer in the United Nations Relief and Rehabilitation Administration.  She was a licensed pilot in the Civil Air Patrol and the first in the US to train teachers in aviation.

Ever Wonder Who Received the First PhD at UNM?, Nancy Brown Martinez